Nate Logsdon loves everything in life more than you’ll love anything in life. Endlessly upbeat, infectiously positive and overwhelmingly intense, Logsdon has two settings: Full Speed and Sleeping. As the front man for the band Mumford’s, Logsdon has become a minor legend in the central Iowa music scene for an intense stage presence and a passionate demeanor in everything he does. This carries over to literally everything else in his life, be it his relationship with fiancee (and Trouble Lights front woman) Adrien Daller, or his work with online alt mag The Ames Progressive (where he pens blog entries with titles like “Steering My Hustle Ship Through the Ocean of Consciousness”). But perhaps nowhere is Logsdon’s passion for life and music more evident than his work with the Maximum Ames Music Festival.

Max Ames Fest is a beautiful miasma: Once a year for three years now, little Ames, Iowa—home of Iowa State University and boasting a permanent population of 58,000—gets invaded by 130 musical acts in over 20 different venues on four days. It’s a glorious cacophony of sight and sound, enveloping the town and engaging everyone. And while nothing of this size and scope could happen without dozens of volunteers and the assistance of a litany of local businesses and sponsors, the entire thing springs from the mind of Logsdon and his partner, Chris Lyng.

“For our third anniversary of (local arts venue) The Space For Ames, I booked a marathon,” Logsdon said. “We had 38 bands play in 12 hours, back-to-back, on two stages, and everything ran seamlessly. So from there, Chris and I started putting together the idea for an annual festival.”

I sat down with Logsdon in Ames last week to talk about the festival. Spend any amount of time with the man in his hometown, and you become intimately aware of how inextricably Logsdon is tied to the town’s musical identity. Our meeting spot, The Vinyl Cafe, sells merchandise from Logsdon’s music label, Maximum Ames Records; people walk up to the table to ask Logsdon about shows taking place the rest of the week, or to inquire about coming events at DG’s Taphouse, where Logsdon acts as booker. And for everyone he talks to, Logsdon has a broad smile, a strong handshake and, of course, a Maximum Ames Festival flier. 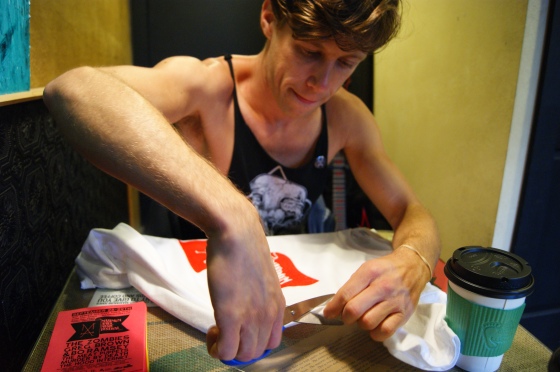 The town, it would seem, loves him back. Logsdon and Lyng knew from the outset that they wanted Max Ames Fest to embrace its home city, rather than just to take place within it. Rather than cordoning off sections of downtown, or taking place on the outskirts, the pair set out to involve local businesses and engage the town directly; an idea that has been met with no resistance.

“There’s a unified culture in the music scene in Ames that’s really reflected in the business community,” Logsdon told me. “Not only do we have the talented bands, (but) everyone is so together and on message with what we’re trying to do, so we can have such a logistically challenging event.”

Logsdon’s dream was always to make Max Ames Fest as much about showcasing the city as the music. He laughs when he calls himself a booster, but the affinity is real.

True to Logsdon’s commitment to pushing and supporting local music, the vast majority of the acts playing Max Ames are Iowa born and bred. But every year the festival aims to supply festival goers with high quality, musically important national (or global) acts as well. And while budgetary concerns and scheduling conflicts will probably always conspire to keep the highest profile acts out of the festival, Max Ames has given attendees the chance to see some seminal music up close and personal: last year’s event brought in rockabilly queen Wanda Jackson, and this year’s event boasts British Invasion veterans The Zombies, influential alt-rock act The Meat Puppets, and Iowa’s own music legends, Greg Brown and Bo Ramsey.

“We always aim for ‘living legends,'” Logsdon said. “The thing we hear most often from people (at the festival) is ‘I never thought I’d see this, but I especially thought I’d never see this in Ames.'”

But, of course, the headliners aren’t all there is. There’s an old golf adage: “Drive for show, putt for dough.” The living legends on the marquee mark Max Ames’ big swing out of the tee box. But it’s the other four days of music where the festival makes its bones. To that end, Max Ames does its level best to please.

Featuring an exhaustive lineup of local and regional music, the festival provides listeners with a banquet of choice. A glance at the Max Ames schedule is a game of connect the dots. And whether you’re looking for Coralville punk juggernauts Lipstick Homicide, or Fairfield avant guarde act Little Ruckus, or Ames guitar master Dylan Boyle, Max Ames acts as your white rabbit, leading you down one rabbit hole after another, sending you to parts of the city you rarely think about and perhaps never visit, all in the name of tracking down that one perfect sound.

“You program your own festival,” Logsdon said. “You pick out the bands you want to see and create a theme based on your own interest. And while you’re doing that, Max Ames is taking you to places in town (that) you haven’t thought of as cultural or musical spaces.”

We chat about 20 minutes, Logsdon and I. Then he’s gathering up his stuff and heading out the door. It’s crunch time, you see, and there’s always something else to do; some place else to be. This thing’s not going to promote itself, and Logsdon’s got too much energy to not do it himself. At least, I think to myself, it’ll be done soon, and then he can have some richly deserved down time. Or not.