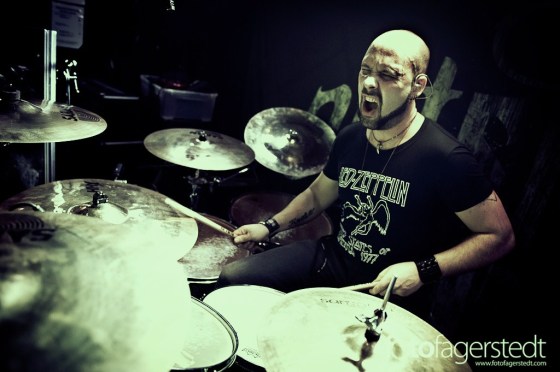 Something ridiculously cool happened to me a few weeks back. I got asked to interview an international band. And not only an international band, but a Swedish metal band. I grew up with a friend who thrived in the presence of that body shakin’ hard rock music. He donned the metalhead mohawk and constantly pushed his hearing farther and farther into oblivion with his omnipresent headphones blasting Opeth. I had a preset impression of metal music, seeing as it’s not my genre of choice. And that impression included the typical sterotypes: spiky hair, dark clothing, and loud incomprehensible lyrics.

And then I met Fredrik Kretz, drummer for Outshine, a metal band hailing from Gothenburg, Sweden. Not only one of the nicest musicians I’ve encountered via email–even when he had to bug me to send him interview questions–but also a wealth of insight when it comes to a music scene we don’t get to hear much about being thousands of miles away. (You can practically hear the stereotype shattering in my head.)

Outshine is hitting the Vaudeville Mews this Wednesday, March 27. Show starts at 10pm with a $5 cover. They’re taking the stage with headliners Carbellion and fellow opener Nest of Snakes. Don’t miss it, dudes.

Band Bombshell: Give me a little background on your history with music. Where/When did you start?
Fredrik Kretz: For me it all started out with a drum kit, like 20 years ago. I tried to play the kit at a random party in a rehearsal space. Of course it sounded like crap, but I felt right away that this is something I’d like to develop and do on a higher level.

Years later, I played in various punk/garage bands. I met Jimmy in 1998, the guitarist and founder of Outshine. In short, we started out in a stoner/garage band, but he later headhunted me as a drummer of his own project and so Outshine was launched as a live band.

We started right away to write material for our first album “Bad Things Always End Bad” (2007). At that time we kinda realized what efforts were required for getting a buzz around a band and that it doesn’t come easy, so to speak. I have a friend from Kenosha, Wisconsin who was visiting for holidays in Sweden, think it was 2005. He watched us rehearse and really liked our sound, so he dropped the idea of us going abroad on a U.S tour.
When looking in the rearview mirror, it turned out pretty good since we, as we speak, are doing our 6th U.S tour and releasing our 4th album.

BB: Describe your music in three words that begin with an “O.”
FK: Overwhelming, obstinate, and onion roll. (Editor’s note: I pray to the music gods that the onion roll is some sort of Swedish dance move.)

BB: Who are your musical muses?
FK: For me personally there are a lot of influences from the ’70s heavy rock scene. For the other guys there are a lot of grunge, metal, and gothic vibes. We refined the compound over the years and that is the reason we managed to develope our unique sound. A sort of rock-metal-gothic hybrid.

BB: If you could play with any musician, who would you choose and why?
FK: Bob Log would be great. He is unaccompanied, meaning we don’t have to worry about our backline.
Seriously, there are so many talented, hardworking bands and musicians out there. It’s a privilege to cooperate with you! (Yeah you know who you are!)

BB: What was your local music scene like growing up?
FK: The straightedge scene was massive in my neighborhoods. I was never into that stuff. Instead, I grew my mohawk, played punk music, and was angry in general.

BB: How do you think Swedish music scenes are different than American music scenes?
FK: Sweden is a really small country, (less than 10 million people) so there’s often a mentality of writing and promoting your music internationally.

You guys are over 300 million, so good artists can basically tour nationally on a regular basis.

A downside of the Swedish music climate is sometimes a cause of bad will and a envy kind of thing going. You know, “I hope you never make it, because I didn’t.”
We never experienced that kind of crap. Some people seem more self-confident and therefore more cooperative, I guess.

BB: What is your favorite part about touring?
FK:As a touring band there are lots of benefits, like seeing new places and meeting great people. I’m allowed to drink beer at work which might be a determining factor of holding on to the scene, haha!

BB: If you had one piece of advice for local musicians trying to make it big, what would it be and why?
FK: Music scenes have changed so much just over the last decade, really. Artists always have to adapt to that kinda stuff.

Forget about fairytales like being scouted, getting contracted with a major label, and making it big over a night.

Have a good ground product and the intention to work your ass off for years while putting in loads of money. Don’t let the no-sayers stop you–run them over with your great musical spirit.