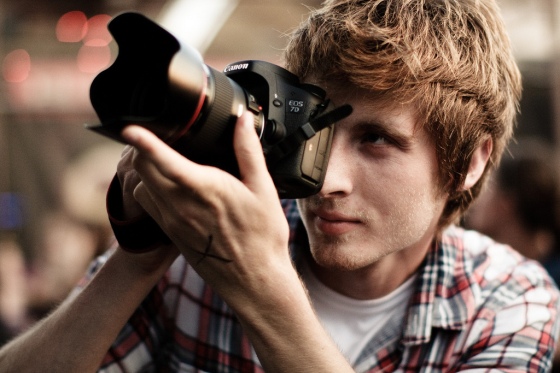 I have this uber talented photographer friend. The Minnesota-native has been the focus of at least one fan fiction, had his photos of Owl City picked up and used for the band’s promotional materials, and is continuously featured in Alternative Press magazine.

Matt Vogel, 21, is awesome and I snagged a few minutes with him for a Q&A before he gets famous and way too busy. Take a look at his work–it’ll happen. Aside from photography, Matt also works as a web designer for Shed Web Design and is the Music Director for Idobi Radio.

Read on and see what got him started and why he doesn’t get hung up on glitzy gear and expensive lenses. And local musicians: If you’re looking for someone to take promotional photos of your band, this guy’s looking for some work. Shoot me an email/FB message and I’ll put you in touch.

Band Bombshell: What got you into music photography?
Matt Vogel: I went to my first concert when I was 16 and thought it was the coolest thing ever. Just the atmosphere of the whole thing and how much more real music felt when seeing an artist live… it was really incredible to me. So, I started going to more and more shows, and eventually started taking my mom’s camera to a few of the smaller local ones. I started building a portfolio and making contacts and eventually started working for some smaller online publications.

BB: Who is the best band you’ve worked with?
MV: In terms of favorite artists to watch, I love when I get to work with Imagine Dragons. They put on such an amazing live show and are absolutely captivating, they’re such good musicians. Another one of my favorite bands is Of Mice & Men. They’re a metalcore band who have a bit of a younger audience, but their intensity is amazing. Their crowds are so insane as well, it’s so much fun to shoot.

BB: Do you have any crazy stories from shooting at shows?
MV: Nothing too crazy! I’ve narrowly been missed by various things that are thrown or crowd-surfed into the photo pit… shoes, water bottles, beer bottles, people, etc. but have escaped major bodily harm every time.

BB: What’s next? Any awesome upcoming shows/freelance work?
MV: Tours die down in the winter months, so nothing huge on the horizon!

BB: Which publications have you been featured in?
MV: I have shot for a number of internet publications and webzines in the past, but I mainly shoot for a music magazine called Alternative Press. Some photos I’ve shot for bands have ended up in other publications but I haven’t worked for them directly.

BB: Which is better, film or digital?
MV: I guess it depends on what your personal preference is and the situation you’re shooting in. I always shoot digital at shows for a number of reasons. The most important being the number of photos I need to take – for instance at an all day festival I’ll take 2,000 photos a day and end up with a couple dozen keepers, and maybe a handful that I really like. If you tried to shoot like that with film, it would be absolutely impossible.

BB: If you had an unlimited amount of money, which camera would you buy?
MV: If I really had unlimited money I’d buy every camera! To be honest I don’t even keep track of all the ultra-professional cameras that Vogue photographers shoot with or anything like that. Partially to reduce gear-envy and partially because I feel like it’s really healthy practice to work with what you have. Every photographer seems to go through a phase where they think their photos suck because they just need a certain camera or lens. Those things definitely help, but I’ve seen some absolutely amazing photos with $400 setups that are well beyond anything I’ll ever be able to do.

BB: Where do you think the best local music scene is?
MV: I’m from Minnesota, and only really know the local scene there, and don’t feel fit to judge too many others! Minnesota has a lot of really cool hip-hop artists and a ton of amazing smaller bands as well.

BB: Any tips for readers trying to make a go at concert photography?
MV: Just like anything else, the more you practice the better you get. Of course there are people who are naturally really amazing photographers and those who can’t seem to find their path in it, but either way shooting more never hurt anyone.